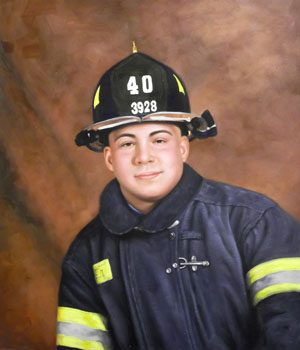 flights of stairs at the San Diego Bayfront Hilton in honor of fallen first responders from the September 11, 2001 terror attacks.

Climbing is tiring but it is ultimately a fun and extremely moving event. Every year there is a guest speaker who was at ground zero that fateful day, a piece of metal beam from the World Trade Center and a chance to honor and REMEMBER the heroes who did not survive the attacks.

Having no personal connection to anyone who was there that day I simply picked a fireman with the same first name as mine, Michael additionally his last name’s proximity to a musical term(Aria). Over the past five years Michael D’Auria has become ‘somewhat’ of a personal connection to 911, although, of course in no way as intense as losing someone as Michael’s family has endured.

This time last year I was just beginning recording/writing my CD, “Dude.” During this period at the 2017 Stair Climb I had the idea to honor Michael and his memory with one of the songs. The song which would become D’Auria is based in part on Brahms’s 4th Symphony. The stately nature of the music was perfect for the dedication. Special thanks again to fellow guitarist Fred Benedetti for lending his musical expertise on the track.

Michael is remembered as a son, brother and inspirational member of his extended family especially with his positive influence on younger relatives. The 25 year old was also known as a great chef among his fellow fireman gaining their deep culinary gratitude!

I think about Michael a lot even though I never met him…wish I did though! I also think about his mother Nancy whom I contacted to make sure she was ok with the idea of a song and his photo being used on the CD. A concern of hers is that Michael be remembered! I will continue to climb in his honor every year and promote his story. I even got a chance to present Michael to the climbers in my start group.

Rest in Peace Michael and Thank You for your selfless sacrifice!