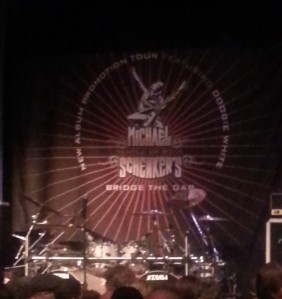 This past Saturday night, legendary rock/metal guitarist once again brought his Flying V’s to San Diego. This time out in the sticks a bit to the Ramona Main Stage.

Seeing Schenker, one of my earliest and greatest musical influences, is always special and never a let down. The man can play! Plus, in the ‘stranger than fiction’ category, my old pal, San Diegan, Wayne Findlay, now tours and records with the band as keyboardist/guitarist.

It’s always easy to review a Schenker show….masterful guitar work, great sound, energetic band. This show lived up to all! Only drawback…the stage was too low! Since they set up tables you can’t really get to the front and see Michael’s hands! Ramona MainStage is a cool venue and I recommend you get up there as they have some great acts coming though in an intimate venue….but, they either need to raise the stage a bit or clear out the tables and let a rock n roll show happen! I know some of the aging rockers now days like to get a table and relax and watch a show, but c’mon rock n roll is rock n roll!!!! You’re past selves would have kicked those walkers out from under your present selves and you know it!

Another oddity at Schenker shows… I am always surprised how much the crowd seems to know the UFO songs over his solo work. Maybe because  I am a bit younger than the average fan…lol! Love the UFO stuff but I was raised on his first four solo albums and always want to hear more of those songs! This show did replace a few of the UFO tunes from recent tours with the aforementioned. Even played Assault Attack from the likewise titled 80s album. One of my top five albums All Time!

Since I was not able to find the current tour setlist any where beforehand thought I would do my best to represent the San Diego show here.

Rock My Nights Away

Cry for the Nations

Another Piece of Meat

Before the Devil Knows You’re Dead

Attack of the Mad Axeman

Where the Wild Winds Blow*

*Since I hadn’t had a chance to hear the brand new album, “Bridge the Gap,” I estimated these titles as best I could.