We all know about the Van Halen saga with singers. David Lee Roth, Sammy Hagar, the horrible stint with Gary Cherone. But what about Paul Shaffer on his Hammond organ??? Thank goodness this was just a jam session…Cool video to see but the Hammond is not my favorite sound in rock n roll history.

I did hear that VH was actually contemplating using a bunch of popular singers as replacements after DLR’s departure. An All-Star cast would have been interesting, but, I think the Sammy thing worked out ok for them. The only name I heard for the All-Star album was Phil Collins…hmmmm…

This album was 3rd in a line of alpha numeric titled Van Halen albums. The Roth era was ushered out with, “1984,” while the Hagar era began with, “5150,” this album, “OU812,” and then, “For Unlawful Carnal Knowledge,” which is really just an elaborate play on the words in the title’s first initials…..shhh I think it was a bad word, but, dont tell anyone!

There are some great songs, “Mine All Mine,” “When It’s Love,” “Cabo Wabo,” “Feels So Good” and “Black and Blue.” There are some forgettable songs too… Van Halen reached a new ‘chic’ status with “Finish What You Started.” It displayed a kind of hip adult coolness that appealed to a whole new audience for the band.

The summer of ’88 was great and I remember cranking this album at the San Diego beaches and having a great time. However, the production on this album and the thin guitar sound Eddie utilized leave a little to be desired in the history of VH’s storied output. Time, in my opinion has not been kind to, “OU812.” Eddie reached back for a heavier sound for his recordings after this one. While not in the caliber of those amazing Roth Era recordings, the guitar sound and production on subsequent albums has been much better.

That said…a slightly lackluster Van Halen is better than a lot of other bands strongest efforts!

I have seen a lot of musical acts in my day. My first concert was Ozzy with guitarist Randy Rhoads just two months before his fatal plane crash. I’ve seen Eddie Van Halen, Michael Schenker, Jimmy Page legendary rock/metal axe-men. I’ve seen classical greats John Williams and the Romeros. I’ve been to the Chicago and Los Angeles  Symphonies. I’ve seen local and less-known musicians come through town and absolutely blow everyone away. I’ve seen some of the biggest acts in the world; Led Zeppelin, Pink Floyd, Black Sabbath, Aerosmith…, as well as, some of the most incredible street musicians in America’s big cities…the people you miss your train simply to hear a few more songs. I’ve been to shows in rock, metal, Jazz, classical, world music, pop,…on and on! But, I never saw/heard anything like I did Tuesday night at San Diego’s House of Blues. 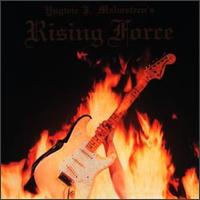 Since his debut album, “Rising Force,” in 1984, I have been a fan. His blistering fast runs and arpeggios combining Heavy Metal with musical phrasing of the Baroque and Romantic periods are absolutely stunning. ‘The man obviously took his guitar lessons seriously,’ as one of my friends put it!

The knocks against Yngwie for the past thirty years are as earned as his virtuosity.

He is known for being a bit of a Diva and arrogant. ‘Bit’ might be an understatement. His music, although it has stood the test of time for thirty years, is thought to be lacking in general appeal to those outside of the music/guitar aficionado. There are not a lot of hits, hooks and catchy tunes in Yngwie’s output. His sound and style have not changed much over the years.

The Diva tag comes from a somewhat pompous persona. The J. in his name, as if he is going to be confused with another Yngwie Malmsteen. The use of words in his titles like opus. Oh yeah and he is 50 years old and still years leather pants, no shirt and gaudy jewelry…so the argument is made.

Yngwie hasn’t changed much over the years…which can be viewed as both a lacking and admirable trait. Vivaldi the Italian composer wrote over 500 concertos. Since they were all similar in style it is often jokingly asked , ‘Did Vivaldi compose 500 concertos or one concerto 500 times?’ This question might be applied to Yngwie’s output over his career, as well….but no denying the man’s sheer capability to play the guitar like no other.

Heading to last Tuesdays concert I was stoked to see Yngwie, but, more as seeing a relic. He could be crossed off my list of musicians I want to see but haven’t. I thought it would be a little boring. Watching Yngwie shred all over the place while his band sheepishly backs him up.

The ability to play a concert is hard enough for anyone…but to put on a show of that caliber and not lose your musical chops is awe-inspiring.

We’ve all seen musicians use gimmicks live. Playing with their teeth, spinning and throwing their instruments, creatively creating feedback while putting on a ‘rock show.’ Yngwie does all of these, but, it doesn’t seem gimmicky. He legitimately has put time into incorporating all these theatrics into his ‘musical’ performance.

His speed and precision have not declined at all in the years since his 1984 debut. Equally astounding is his use of effects. All guitarists use them, like the whammy bar, they often become a crutch to make any level musician sound rocking cool. Yngwie obviously has invested time working out his electronics as part of his guitar acumen.

Most impressive during the show, was his ability, while playing a blistering arpeggio riff to accompany himself with bass pedals using his feet. Not just one note to give a boost underneath but a full contrapuntal  bass line with his feet while seamlessly arpeggiating over the top.

The band, in typical Yngwie fashion, are not easy to find out much info about. However, these guys played great. Of course to play with Yngwie…who the band referred to as ‘the Maestro,’ throughout the night, you’ve got to  have chops. You have to play fast, but, they put on a rock show, as well. They laid down a rock groove that Yngwie could soar over with his guitar acrobatics while keeping the crowd rocking, not letting it feel like a man and…. oh yeah a band(even though Yngwie does take about 3/4 of the stage for himself)…kudos to those guys!!

Bottom line…if you haven’t seen Yngwie yet but have thought about it….GO!

Michael is one of the great guitar shredders of the rock/metal era and still going strong today after 40 years in the business. The master of the Flying V!

You probably know by now that I’ve dubbed this Van Halen Week in San Diego. Eddie, Dave, Alex and Wolfgang are coming to San Diego for the first time since DLR leaving the band after their “1984” tour. Unfortunately, as a kid I missed this last chance to see the original lineup although I saw them several times with Sammy Hagar.

Now they are back touring the world again! Yeah, they are older and a bit kookier, but, no way I was going to miss them this time. Of course it still isn’t the original lineup as Eddie’s son Wolfgang has taken the place of original bassist Michael Anthony.

Eddie was my biggest guitar influence growing up and to this day, as well. The new album, “A Different Kind of Truth,” is sinking into my brain more and more as I catch the nuances that Eddie always supplies…crazy rock star or not the guy is an incredible musician.

The setlist looks great too. I thought they would go with a lot of their more poppy tunes but it looks like they have gone with a healthy mix of their hits, as well as, some of their more obscure classics.

I am really stoked to hear songs that I never thought I would hear live. “Women in Love,” “Ice Cream Man,” and my all time favorite Van Halen song, “Hear About it Later,” from the album, “Fair Warning”.

Seeing how it has been 28 years since they made an album and toured with David Lee Roth, I thought I would offer some historical perspective.

Things we never heard of:

Now that is a long time to wait for a concert…a wait that ends this Thursday!